&nbsp;
&nbsp;
Terri Saelee, Refugee Ministries Director for the North American Division, reports that
the Syrian Refugee crisis is the worst displaced persons crisis since World War II.
The report was given during the Year-end Meeting of the North American Division
on Sunday, November 1, 2015. &copy;2015 NAD Communication/Dan Weber
&nbsp;
&nbsp;
November 1, 2015: After a devotional and prayer time, the North American Division started the morning session of the third business day of year-end meetings with a report from the nominating committee. The report brought the names of several department leaders for nomination to elected office by the NAD voting constituency. All individuals named in this partial report were voted into their positions (http://ow.ly/U95IN).
&nbsp;
The first report of six NAD &ldquo;Building Blocks,&rdquo; Refugee and Immigrant Ministries, followed. R. Ernest Castillo, vice president of the NAD, introduced presenters who described four of 14 different ministries under the umbrella of Multi-Ethnic/Lingual Ministries: Jimmy Shwe, Terri Saelee, Gabriela Profeta Phillips, and Dean Coridan.
&nbsp;
After a question and answer session between Castillo and Shwe, Saelee spoke on the Syrian refugee crisis, and how the church can minister to refugees. &ldquo;The Syrian refugee crisis is the worst since World War II,&rdquo; said Saelee. &ldquo;There are 60 million refugees worldwide; 3.1 million in the United States.&rdquo;
&nbsp;
Phillips followed with stories from the Collegedale/Chattanooga local resettlement office, quoting a member of one assisted family: &ldquo;We didn&rsquo;t immigrate to the United States, we immigrated to God.&rdquo; Coridan spoke about a Kurdish family that his church adopted and how they were able to share Jesus with the family.
&nbsp;
The report concluded with statistics: of the 34,928 baptisms and professions of faith recorded in the NAD at the end of 2014, 23,153 were multi-ethnic/lingual baptisms.
&nbsp;
&nbsp; 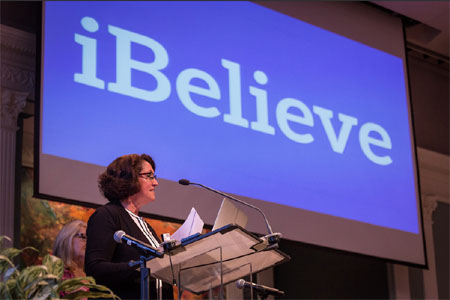 Sharon Aka, Associate Director of the Adventist Learning Community (ALC), gives the
report of the ALC Building Block and provides a sneak peek at the upcoming web video
series, iBelieve, which gives young adults a place to talk about things that are relevant;
a place to question what they believe in, to talk about topics that the church doesn’t talk
about; and to provide an opportunity for discussions and Bible study for themselves. The
project will launch on the ALC in the near future at www.AdventistLearningCommunity.org.
&copy;2015 NAD Communication/Dan Weber
&nbsp;
The second &ldquo;Building Blocks&rdquo; report came from the Adventist Learning Community (ALC),&nbsp;an NAD initiative that offers ministerial and educational training designed to &ldquo;strengthen formal education, enable the sharing of resources, streamline ministerial training, and [disseminate] information to the extended Adventist community and beyond.&rdquo; Adam Fenner, Sharon Aka, and Larry Blackmer, NAD vice president for Education, detailed what courses are already available, and what projects are in development.
&nbsp;
Partnerships with many NAD and GC ministries to support educational pursuits of pastors, teachers, and students were highlighted. Plans unveiled included 40 training courses for local lay-leaders; 50 short videos/blogs for young adults who have questions about the church (&ldquo;iBelieve&rdquo;); nine continuing education courses for pastors from the 2015 CALLED convention (available by Nov. 4); and a creation documentary. ALC hopes to &ldquo;take the seminary to the world.&rdquo;
&nbsp;
Department reports continued during the course of the day. New Vacation Bible School materials, &ldquo;Go Fish for Kids,&rdquo; and Kids Ministry Ideas were just a few of the programs the Children&rsquo;s Ministries department mentioned in their report. Sherri Uhrig, in the Children&rsquo;s Ministries report, stated, &ldquo;We want our children to know Him personally.&rdquo;
&nbsp;
&nbsp; 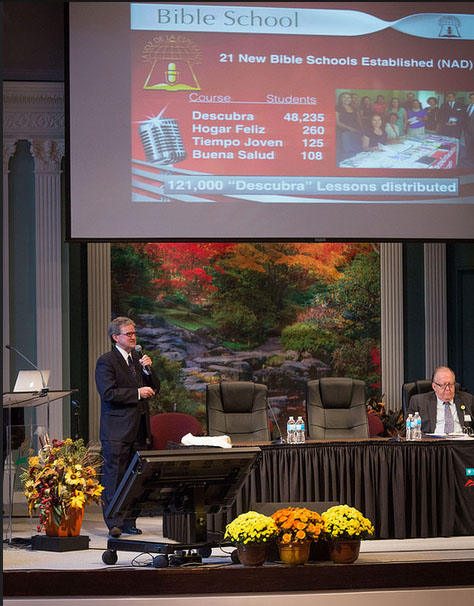 Gordon Pifher, vice president for Media in North America, introduced the Adventist Media Ministries report. The report included video accounts and oral presentations from seven media ministries of the division: It Is Written, Lifetalk Radio, Jesus 101 Biblical Institute, Breath of Life, Faith for Today, La Voz de la Esperanza, and Voice of Prophecy.
&nbsp;
Shawn Boonstra, director of Voice of Prophecy, detailed four areas of emphasis: urban evangelism, local church franchises, &ldquo;smart&rdquo; broadcasting, and humanitarian projects. Boonstra stated, &ldquo;We are no longer a media ministry, we are an evangelistic ministry and use media to accomplish that &ndash; and do it well.&rdquo; Boonstra is excited for the ministry to branch out: &ldquo;God used the Adventist Church to turn my life around. I&rsquo;m trying to give back. . . . I&rsquo;ve never lost sight of the feeling of being out there, of knowing I&rsquo;m lost &ndash; how do you not give this away?&rdquo;
&nbsp;
The NAD statement on human sexuality returned for a second day. After approximately 50 minutes of discussion the statement was tabled, and the committee will work on minor revisions before bringing it back to the voting constituency on Monday, November 2. (More on this in a subsequent article.)
&nbsp;
Two other reports stemming for the 2014 NAD meetings in Dulles, Virginia, were given and after discussion, voted with clear mandates to, as the reports were titled, continue 1) &ldquo;Advancing the Mission To Contemporary Audiences;&rdquo; and 2) &ldquo;Advancing Adventist Christian Education in North America.&rdquo; (More on these reports in a subsequent article.)
&nbsp;
The business wrapped for the day shortly after 5 p.m. when Elissa Kido, director of theCenter for Research on K-12 Adventist Education at La Sierra University, was presented with an award of excellence for her contributions in education from the NAD Education Department. Accepting the award, Kido emphasized her belief in the importance of Adventist education: &ldquo;I&rsquo;m here because of an Adventist aunt who thought I should go to Pacific Union College.&rdquo;

*For ongoing updates regarding the 2015 NAD Year-end Meeting, go to www.nadadventist.org/article/1073743074/news/archived-news-stories/2015-news-archives/2015-nad-year-end-meeting-news-and-presentations
&nbsp;

** The news story you are reading is RSS-fed and the link will change. If you wish to share a link for this story, please use: www.nadadventist.org/article/1073743082.