Daniel R. Jackson, president of the Seventh-day Adventist Church in North America (NAD), said we serve an amazing God, who invites us into partnership with Him to reveal His grace to a world in need.

Jackson, preaching a sermon entitled &ldquo;The Collaborators,&rdquo; challenged the delegates, families, and guests attending the 2015 North American Division Year-end Meeting Sabbath program to rely upon God&rsquo;s strength, not their own, as He calls us and then assures us that He will lead. 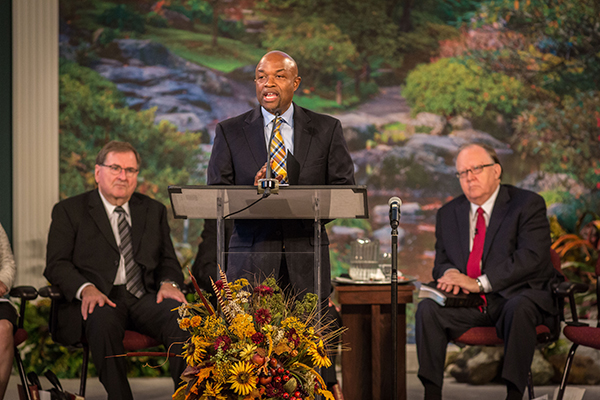 G. Alexander Bryant, NAD Executive Secretary,&nbsp;introduces Daniel Jackson.
2015 NAD Communication/Dan Weber
&nbsp;
&nbsp;
The sermon was preceded by a moving introduction by G. Alexander Bryant, executive secretary of the NAD. Bryant reminded the audience that exactly one year ago, he introduced Jackson, his &ldquo;friend, colleague, and brother,&rdquo; by saying he believed that God still had more work for the Division under the leadership of Elder Jackson. Bryant said Jackson&rsquo;s re-election validated this saying, &ldquo;The Lord did have more work for Daniel Richard Jackson to do in the NAD.&rdquo;
&nbsp;
Following the introduction, Elder Ted N.C. Wilson, president of the Adventist world church, was invited onstage to offer a prayer of dedication for Elder Dan Jackson and his administrative team. His wife Donna; G. Alexander Bryant; and Tom Evans, NAD treasurer; joined Jackson on stage, along with the NAD vice presidents.

The sermon expanded on the theme of this year&rsquo;s NAD Year-end Meeting, &ldquo;The Grand Collaboration,&rdquo; which Jackson explained was not a partnership with each other, although that is vital, but rather focused on collaboration between God and His children.

Acknowledging that often God hears His people reply to His call with excuses of inabilities and weakness, Jackson said that God stoops down and reminds us &ldquo;[His] grace is sufficient for you, for my power is made perfect in weakness.&rdquo; (2 Corinthians 12:9).&nbsp; Jackson emphasized that God&rsquo;s call for a &ldquo;Grand Collaboration&rdquo; is an invitation to rely upon His strength, not ours. 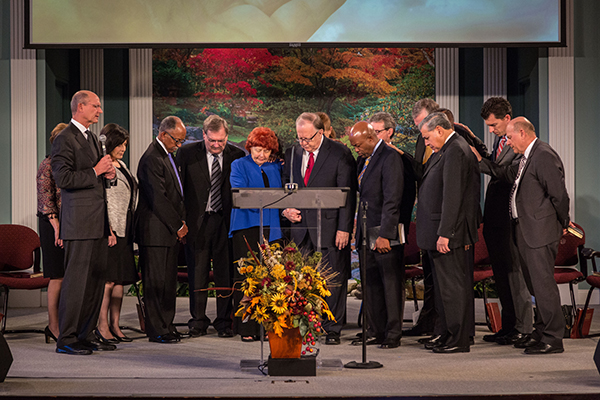 Ted. N.C. Wilson, president of the General Conference, prays
for the leadership of the North American Division.
&copy;2015 NAD Communication/Dan Weber
&nbsp;
&nbsp;
&ldquo;God calls us to serve Him by witnessing for Him in whatever state we find ourselves,&rdquo; Jackson told the more than 400 guests in attendance, and a live television audience watching the live broadcast on the Hope Channel. &ldquo;At our very weakest point, with all of our self-perceived deficiencies, when we are thriving or when we are diving, God says, &lsquo;I want you!&rsquo;&nbsp; His message is that as we link our arms with His mighty arm, that we become the collaborators!&rdquo;
&nbsp;
Jackson set the tone for his sermon by sharing one of his favorite paintings, Emile Renouf&rsquo;s &ldquo;A Helping Hand.&rdquo; In this painting, Renouf depicts a young girl and her grandfather in a small rowboat. The little girl, hands on the oars, believes she is paddling the boat. It is evident looking at the strong face of her grandfather that he is in fact paddling.
&nbsp;
&ldquo;You are not insignificant! Connected to the will, to the might of God even our infirmities can become strengths,&rdquo; added Jackson. &ldquo;The weakest individual in the hands of God can become a mighty agent of His grace and salvation.&rdquo;
&nbsp;
&nbsp;Jackson, for the most part, illustrated his sermon with the story of Debra, the only female judge mentioned in the Bible. Debra also led the Israelites in a successful counterattack against the military forces of Canaanite King Jabin and his commander Sisera.
&nbsp;
Debra stood up and led the military attack against the Canaanites when the male military leaders of Israel would not.&nbsp; Jackson noted that Debra &ldquo;saw what was happening to her people and was personally angered by it. She couldn&rsquo;t just shrug it off.&rdquo;
&nbsp;
&ldquo;If the church is in trouble today, then you and I have a problem,&rdquo; said Jackson. &ldquo;True leadership mandates full engagement with the issues that we face. There is no such thing as ducking out of the way from an issue.&rdquo;
&nbsp;
Jackson concluded his sermon by asking if the audience believed that God could use a 99-year-old person, a 29-year-old, or even a nine-year-old, to accomplish his work. He then welcomed Ariadna, a nine-year-old church member from Wheaton, Maryland. Her parents Juan and Lerina Reyes, as well as their pastor Willy Benzaquen, joined her onstage. 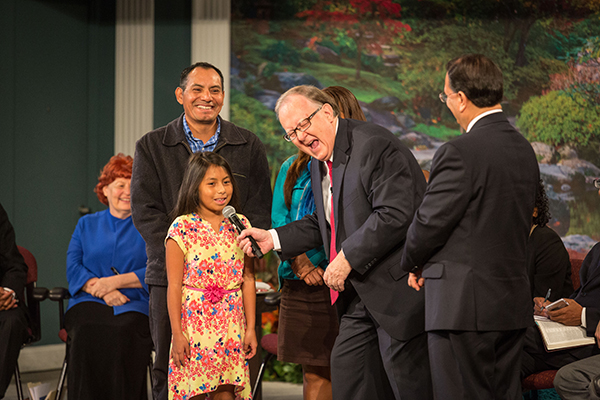 Daniel Jackson, responds to a humorous comment by
Ariadna Reyes. &copy;2015 NAD Communication/Dan Weber
&nbsp;
&nbsp;
The Reyes family, originally from Oaxaca, Mexico, visited many other denominations before attending the Wheaton Spanish Adventist church. Adriadna was baptized last year at the age of eight.&nbsp;
&nbsp;
She then told her parents that she wanted to start a home church in their home. Her &ldquo;small&rdquo; group grew to 30 people, the majority her neighborhood friends aged 8-10. Soon, several of those friends joined the Adventurer Club with full support from their parents.&nbsp;

Adriadna told Jackson that this past August, her parents were baptized. Jackson turned to the audience and asked them: if God could use a child like Adriadna, couldn&rsquo;t He certainly use us all?

** The news story you are reading is RSS-fed and the link will change. If you wish to share a link for this story, please use: www.nadadventist.org/article/1073743079/news/current-newspoints/newspoints-october-31-nad-year-end-meeting-day-three-the-collaborators.