A summary of the final two days
By Kimberly Luste Maran
**To share this story
&nbsp;
November 3, 2015:

The North American Division 2015&nbsp;Year-end Meeting wrapped another day filled with worship, prayer, and business. The morning business began with the Christian Record Services&nbsp;for the Blind&rsquo;s (CRSB) report and its new president, Diane Thurber. A highlight of the report was meeting Marye McKenney, the calendar artist for CRSB, National Camps for Blind Children. McKenney, whose vision is limited to three inches in front of her face, was introduced to Jesus through a summer camp for the blind at age 11.
&nbsp;
CRSB also reported on a variety of ministries and tools they&rsquo;ve produced, including gift Bibles, lending libraries, National Camps for the Blind, health seminars, curriculum kits, and inSight4VETs, which are recorded books for veterans who have lost their eyesight.
&nbsp;
A detailed report from Pacific Press Publishing Association (PPPA) was next. While Jerry Thomas, vice-president of product development, said that digital books &ldquo;will never be the main part of our business,&rdquo; he shared that Adventist-eBooks.com has more than 1,000 books online &mdash; and more on the way.
&nbsp;
As part of the report attendees were given a photo tour of the press; and sharing book,&nbsp;Four Winds of Revelation, was distributed. The book was made available as a free download for 24 hours on several platforms, including Kindle and Amazon, for those who would prefer the e-version. The executive committee members accepted the report as well as the nominating committee report with the five-year term PPPA board selection.
&nbsp;
In regard to PPPA, Dan Jackson said, &ldquo;We have a great asset and great potential through Pacific Press. Drive Dale [Galusha] crazy with questions . . . we want to see the publishing work, the literature ministry, grow in our division. More than 4 billion pages printed, more than 40 sharing books printed . . . we can do more than that.&rdquo;
&nbsp;
Division health initiatives were shared by Katia Reinert, outgoing Health Ministries director. In addition to detailing partnerships and collaborative efforts with other division and General Conference (GC) ministries, Reinert handed out a &ldquo;save the date&rdquo; card promoting theEmotional Wellness Summit, Jan. 13-17, 2016, in Orlando, Fla.
&nbsp;
The &ldquo;Young Adult Life Building Block&rdquo; report continued the morning business. James Black, Marquis Johns, Benjamin Lundquist, and Lavina Seawright presented a myriad of ways the young adults are working to &ldquo;stop the crisis of young adults leaving the church.&rdquo; Some of these included Adventist Christian Fellowship (public campus ministry), events such as Impact San Antonio 2015, and Life Summit, a young adult training/learning conference held concurrently with the Just Claim It 3 teen conference in California on Feb. 17-20, 2016.
&nbsp;
Lundquist shared five steps for Young Adult Life ministry and &ldquo;for all involved in the mission&rdquo;: catch the vision, surrender to God, educate and learn, commit to honest conversation, and take action. Said Lundquist, &ldquo;If it happens under our church roof, it is our responsibility . . . [ministering to young adults] means you and I coming together to collaborate in reaching young adults.&rdquo;
&nbsp;
Johns added, &ldquo;We must continue to collaborate, to reach the young adult generations.&rdquo;
&nbsp;
The business meetings continued after lunch with six departmental reports shared and accepted: Health, PARL/Liberty, Stewardship, Volunteer Ministries, Women&rsquo;s Ministries, and Youth Ministries. These reports are available online.
&nbsp;
Adventist Risk Management and Philanthropic Service for Institutions (PSI) also shared video reports focused on their work in North America. After a vote, G. Alexander Bryant, executive secretary for NAD, announced that both reports were &ldquo;received into our records.&rdquo;
&nbsp;
ADRA Canada, a ministry of the Seventh-day Adventist Church in Canada, was next on the agenda. James Astleford, executive director, said that ADRA Canada has assisted 6.7 million people around the world, and new initiatives are geared toward helping even more. One main initiative is focused on helping maternal, newborn, and child health in the Philippines, Cambodia, Myanmar, and Rwanda &mdash; for 4.5 years &mdash; with more than $20 million in funds coming from the Canadian government.
&nbsp;
Editor Carmela Monk Crawford followed with the Message magazine report. According to Crawford, Message, which became part of NAD as of February 1, 2015, is an &ldquo;entering wedge ministry&rdquo; &mdash; an Adventist magazine on &ldquo;current events for the urban audience.&rdquo; In addition to outlining future plans and goals, the report touched on several recent distribution opportunities &mdash;25,000 copies at the Essence magazine festival, 73 subscriptions and 1,000 copies at the Annual Black Caucus, 30,000 copies during Pope Francis&rsquo; Philadelphia visit, and 25-30,000 copies and 5,000 bottles of water at the 2015 Million Man March in Washington, D.C.
&nbsp;
Crawford also described Message as a collaborative, &rdquo;watchman&rdquo; ministry: &ldquo;The watchperson doesn&rsquo;t come out of the rain, they stay on duty. People will want to know what is happening, what it means&mdash;that&rsquo;s where [Message] comes in. We will wait, watch, and warn.&rdquo; 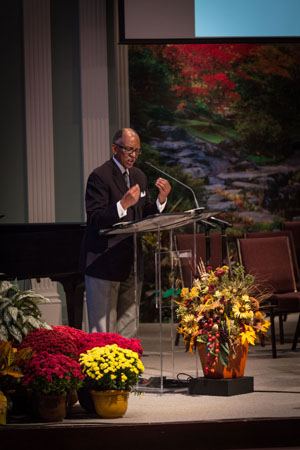 The final &ldquo;Building Block&rdquo; report, on Big Data/Social Media, was presented by Alvin Kibble, NAD vice president for Communication, Public Affairs and Religious Liberty, Executive Training, Coaching and Development, and Publishing; and Paul Hopkins, associate director of PSI. Both presenters stressed the importance of using *big data to &ldquo;understand what your constituents need and where they&rsquo;re going.&rdquo;
&nbsp;
Hopkins offered four reasons for the church to use big data: &ldquo;to make decisions in the now, to try and predict the future and act on it, to benchmark ourselves against others (and ourselves), and to create language around which we can tell stories or communicate with one another.&rdquo;
&nbsp;
Kibble explained that this &ldquo;Building Block&rdquo; shifted from a social media emphasis to one focused on big data with social media inclusion. He said that data is &ldquo;going out there because the market demands it. Lots of &lsquo;data mining&rsquo; is going on, except in the remnant church. [In the world,] no decision is made without big data analytics.&rdquo;
&nbsp;
&ldquo;It&rsquo;s time for us to start heading home,&rdquo; Kibble added. &ldquo;God has placed within our midst a way for us to know our candidates, clients, members better, and ways to better serve them. We can better target different groups to better serve their needs.&rdquo; Planning is underway to form a team to manage data and analysis.
&nbsp;
The business day concluded with two more items: Lincoln Steed was elected PARL associate director and Liberty magazine editor; and a motion that the division &ldquo;affirm a more focused approach to public campus ministry with greater intensity and focus by NAD&rdquo; was passed.

The 2015 NAD Year-end Meeting came to an end about 12:30 p.m. after a morning of reports, votes, prayer breaks, and comments from the gathered constituency:
&nbsp; 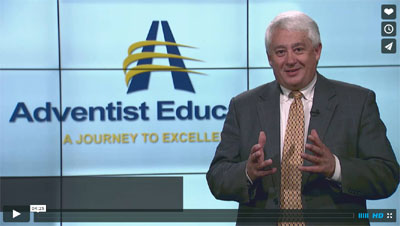 The NAD Education Department video report&nbsp;was presented.&nbsp;Following the report, Larry Blackmer, vice president for Education, shared that the NAD Adventist school system is the only one in the parochial system in which 100 percent of the schools are accredited. As reported&nbsp;in a four-year CognitiveGenesis study, each year, students in Seventh-day Adventist Church schools outperformed in all subjects, for all grade levels, for all school sizes, regardless of ability level.&nbsp;In addition, students in Adventist schools had higher-than-expected academic achievement based on their individual ability.
&nbsp;
Blackmer, candid about losing 16,000 students with 271 schools closing in the past 14 years, gave specific examples of how the department will help the 60,000 students in NAD schools know, &ldquo;more than anything, that Jesus and the Adventist Church loves them.&rdquo; He also talked about growth. Two of the newer departmental concentrations were shared, geared toward the youngest students: the Pathways (faith-based integrated literacy program) kindergarten curriculum, and a Florida Hospital partnership with &ldquo;Cobblestones,&rdquo; early childhood education curriculum.
&nbsp;
The NAD Evangelism Institute, commonly referred to as &quot;NADEI,&quot; continued the morning business session with Ron Clouzet, director, giving their report. The report described how they serve the church, the events they host/coordinate, and the resources they provide, including books and other training materials for church growth, church planting, small groups, and pastoral resources. Clouzet mentioned that SEEDS church planting conferences would continue and expand, and that there would be more urban area evangelism training conducted.
&nbsp;
The final department report came from Native Ministries. The highlight of the report was a video in which faculty, students, and alumni from Holbrook Indian School were interviewed. In the video, Jovannah Poor Bear-Adams, vice principal and former student, said, &ldquo;Our school isn&rsquo;t about killing what&rsquo;s native in the kids. It is about cultivating their faith, their culture, themselves.&rdquo;
&nbsp;
The report also gave these statistics: 33 percent of Native American women are raped or suffer sexual abuse and 65 percent of perpetrators are never prosecuted; 43 percent of Native Americans live in poverty and abuse.
&nbsp;
The nominating committee finished its report with one more nomination: Angeline B. David, DrPH, MHS, was presented as the candidate for NAD Health Ministries director (replacing Reinert, PhD, CRNP, FNP-BC, PHCNS-BC, FCN, who will be an associate director for the GC Health Department). David was unanimously approved. The committee also reported that Delbert Baker did not accept the appointment to president of the Guam-Micronesia Mission. (The Guam-Micronesia Mission has reported to NAD since October 2011.)
&nbsp;
Policy agenda items completed the day&rsquo;s business with several NAD policies amended and approved by the voting constituency. One &ldquo;consent agenda&rdquo; item that garnered favorable commentary: a policy change to help seminary students who are hired after graduation.

*Big data describes the exponential growth and availability of data, both structured and unstructured. It is a broad term for work with data sets so large or complex that traditional data processing applications are inadequate and distributed databases are needed (Source: Wikipedia). According to IBM, &ldquo;Big data is being generated by everything around us at all times. Every digital process and social media exchange produces it. Systems, sensors and mobile devices transmit it. Big data is arriving from multiple sources at an alarming velocity, volume and variety. To extract meaningful value from big data, you need optimal processing power, analytics capabilities and skills.&rdquo;
&nbsp;

** The news story you are reading is RSS-fed and the link will change. If you wish to share a link for this story, please use: www.nadadventist.org/article/1073743089/news/current-newspoints/newspoints-november-10-2015-year-end-meeting-wraps-up#data